ARLINGTON — Arlington County’s 2015 point-in-time count showed an overall 18 percent decline for sheltered and unsheltered individuals and families in the community.

Arlington’s focus on veterans and people who are chronically homeless – through the 100 Homes Campaign and Zero:2016 program – has yielded dramatic results. Unsheltered homeless singles dropped by 24 percent, from 51 in 2014 to 39 in 2015. In 2013, the number was 146, which is a 73 percent drop over the two-year period. Despite these gains, Arlington’s the two shelters for individuals — VOA-C’s Residential Program Center and A-SPAN’s Emergency Winter Shelter — remained at full capacity.

In Arlington’s homeless shelters for families, counts were up:

“The intentional coordination and collaboration among our government agencies and nonprofits that work to prevent and end homelessness in Arlington has produced impressive results,” said County Board Chair Mary Hynes. “Nevertheless, we can’t let up. Our shelter beds continue to be full to capacity and the number of people fleeing domestic violence is increasing. There is more work to be done.”

Caroline Jones, Executive Director of Doorways for Women and Families (which operates the Family Home as well as its Safehouse for victims of domestic violence), echoes Hynes’s sentiment that putting too much attention on a single night’s count does not tell the full story of homelessness in Arlington. “Family homelessness simply doesn’t look like homelessness in other populations. Limiting the count to shelters and those ’literally on the street‘ on a single night eliminates the real telling of this epidemic. Changing the definition of who ‘qualifies’ as homeless doesn’t solve the problem. Family homelessness is deeply rooted in domestic violence and poverty. When families lack safe housing, they don’t live on the streets. Rather they struggle to find any and every place where they can temporarily stay while trying to flee abuse or rebound from extreme hardship. While not all of these families need shelter, we must continue to look at the totality of needs and ensure the services exist to support these adults, youth and children.”

The 2015 count took place from sunset Wednesday, January 28 to sunrise Thursday, January 29. The effort was coordinated by the Arlington County Continuum of Care (CoC), a core network of interconnected programs and services to assist people who are homeless or at risk of becoming homeless.

In June 2014, Arlington County reached its goal to house 100 homeless persons identified as medically vulnerable through its 100 Homes Campaign initiated in October 2011. In targeting this subpopulation among the homeless, Arlington housed the 100,000th vulnerable homeless person in the U.S. under the umbrella of the national 100,000 Homes Campaign. Even after reaching the goal, outreach workers, shelter and housing providers, and mental health and substance abuse specialists continue to track the vulnerable homeless population on the street, assign them a lead worker, and work toward bringing them in off the streets.

Arlington County is opening the Homeless Services Center Summer of 2015 which will have a day program, shelter program, and a five-bed medical respite program. This will be a “first” for the D.C. Metro area and will help to move individuals and veterans quickly from homelessness to homes.

Doorways for Women and Families has increased the number of beds available for victims of domestic violence due to the increasing need and also assumed the responsibility for the County’s Domestic Violence and Sexual Assault hotline — 703-237-0881.

Arlington County implemented its Centralized Assessment System (CAS) in September 2014. CAS provides one centralized intake process for households who need assistance because they are at risk of becoming homeless, are homeless and have nowhere to go, or have other housing related problems. Households are assessed and screened for specific housing options, including prevention assistance that helps households maintain existing housing or obtain other, more affordable housing; access to emergency shelter for those households who cannot be diverted from homelessness; and access to rapid re-housing and permanent supportive housing for households who do enter emergency shelter. Diversion services are showing initial success, allowing for robust and collaborative “case conferencing” toward enhanced coordination of services for people experiencing homelessness.

Arlington County has a 10-Year Plan to End Homelessness which is governed by the Arlington County Consortium (ACC). The ACC is a private/public partnership of more than 100 members from the non-profit, faith, and local business communities. The plan’s primary goal is that no individual or family shall lack access to decent, affordable housing. Achievement of this goal is predicated on the following broad strategies:

Four 10-Year Plan committees and an executive committee support implementation of goals by ensuring that best practice solutions are used within the continuum of care (CoC).

Many community organizations have joined together to end homelessness in Arlington, and they can all use your help. Click here to learn about volunteering with Action Plan partners. 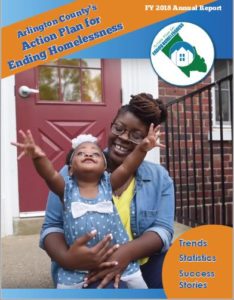